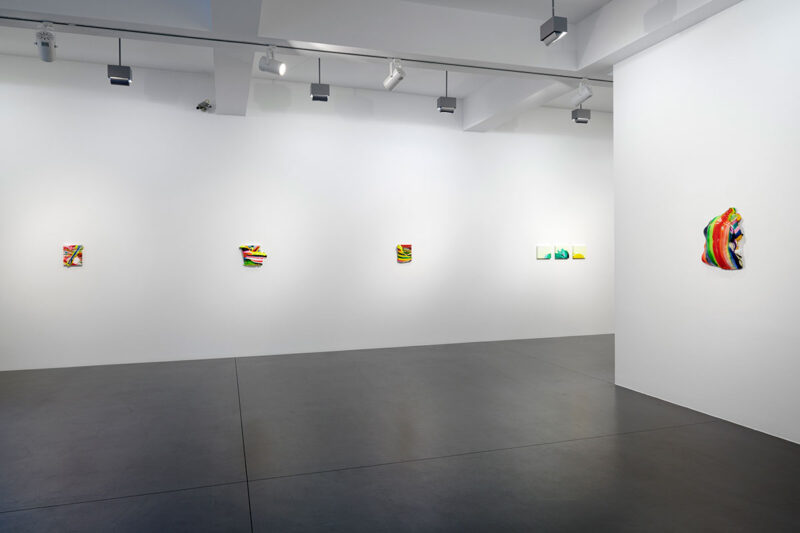 
Yago Hortal was born in Barcelona in 1983. His work oscillates between traditional painting, action painting and three-dimensional wall art. In his second exhibition at the gallery he focuses on smaller works that advance into the third dimension due to a material-intensive technique: acrylic paste is piled on canvas whereby a fragment of the layer underneath always remains visible.

The artist creates unique coats: the colours, ranging from purple to neon green, from bright pink to citrus yellow are applied in generous strokes. Similarly, the CoBrA artists (named after the main protagonists’ domains: Copenhagen, Brussels and Amsterdam) Karel Appel, Constant and Asger Jorn experimented in their abstract works in the 1950s with blazing, complementary colours that were offset against one another, applied in thick, undiluted sheets on canvas. In contrast to aesthetic academicism and Concrete Painting, the group tried, concurrent with Jean Dubufet’s Art Brut, to return to a free and spontaneous form of art. CoBrA firmly believed and propagated that art could move anyone and therefore be comprehended by everybody. Yago Hortal wants the very same for his work: it should have an impromptu effect on the viewer and evoke positive associations.

Additionally, Yago Hortal opposes his lush, three-dimensional paintings with two other recent works that display a new trend: reduced, thinly glazed canvases accentuated minimally with acrylic paste, form a counterpoint to the baroque plenitude: ”A new progression comes through in my works. An unconsciously developed minimalistic intention can be clearly felt.” The reduced make up, the sensitive poetry of shapes and colours counter his expressive pictorial invention. Associations to another great Catalan artist are stirred: in front of one’s inner eye Joan Miró’s series Blue I-III from the 1960s may appear.

The skillful weighing of control and coincidence distinguish Yago Hortal’s artistic creation: it does not tolerate any correction or insecurity but is rooted in a bold expression and a decisiveness within its spontaneous formation.

Manage Cookie Consent
To provide the best experiences, we use technologies like cookies to store and/or access device information. Consenting to these technologies will allow us to process data such as browsing behavior or unique IDs on this site. Not consenting or withdrawing consent, may adversely affect certain features and functions.
Manage options Manage services Manage vendors Read more about these purposes
View preferences
{title} {title} {title}