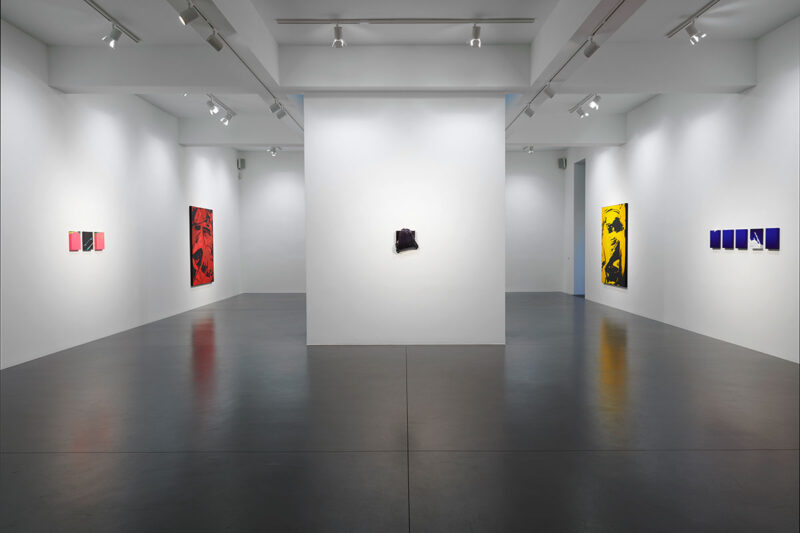 
The Spanish artist Yago Hortal (*1983, Barcelona) has so far been preoccupied with gestural painting by spraying cascades of fluorescent colours that flow over the canvas. Now he is embarking on a new venture. Traces, “paths” remain on the canvas, as Yago Hortal referred to them while preparing the exhibition. “I am more of a drawer than a painter but I need a lot of material to be able to work in this way”, says the artist about his new works, thereby describing the process of their creation.

A PROCESS LED BY ITSELF

The flat surface of the canvas is reminiscent of silk screen printing in Pop Art. The Brushstroke series by Roy Lichtenstein from the 1960s comes to mind. Lichtenstein’s brush strokes convey the impression of having been created in a spontaneous gesture. The opposite is the case: he used a brush to apply the images to a cellulose acetate film which he then projected onto the canvas and was thus able to draw and paint them.
Yago Hortal’s approach is more intuitive: he has no specific ideas about the final work. The artist begins to apply colour to the canvas and then allows himself to be guided by the creative process. The final product is always somewhat different from what he had expected. Yago Hortal’s creativity is characterized by skilfully weighing up control and chance: it tolerates no corrections or uncertainties but is owed to a clear gesture and resoluteness in his spontaneous formulation:

Since 2019 Yago Hortal has not used any fluorescent colours and yet the new works are impressive because of their coloured radiance: blue, yellow, red and green strongly contrast black accentuations which make the works appear to be three-dimensional. In some cases one perceives mysterious greyish-white traces. These are the ‘paths’ mentioned at the beginning. The small formats on show in our exhibition document the preparatory phase of the large pictures: polychrome, serial, strengthened with acrylic paste and thus assuming a third dimension, they refer back to subjects in his painting which preoccupied Yago Hortal in recent years: painting as an object, monochrome colour-field painting, minimalism.

When observing the works in Yago Hortal’s new exhibition, the frequent quote l’art pour l’art, a concept from 19th-century French painting, is more relevant than ever before: painting in its purest form.

Manage Cookie Consent
To provide the best experiences, we use technologies like cookies to store and/or access device information. Consenting to these technologies will allow us to process data such as browsing behavior or unique IDs on this site. Not consenting or withdrawing consent, may adversely affect certain features and functions.
Manage options Manage services Manage vendors Read more about these purposes
View preferences
{title} {title} {title}