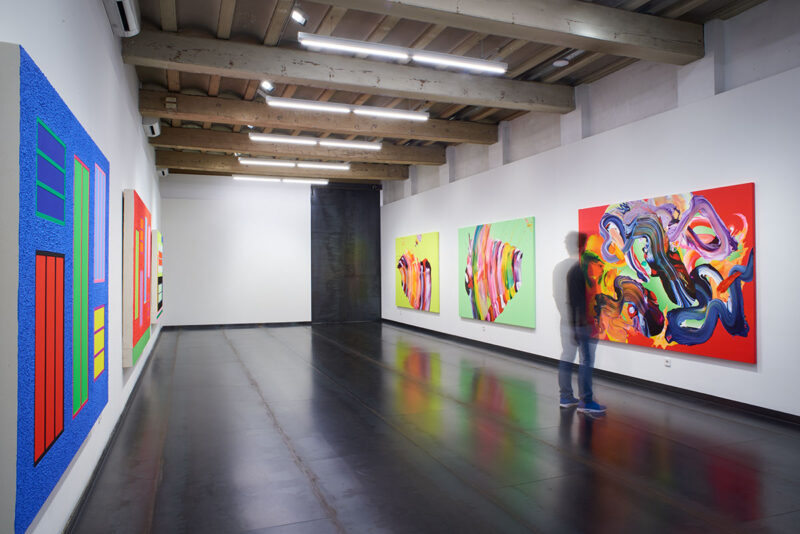 
Senda began working with Peter Halley in 1992, when the Halley presented his work for the first time in its space on Pasaje Mercader. Since then, he has done four solo exhibitions at the gallery over a period of 23 years.

It was after a conversation with Halley, in which we spoke to him about the gallery’s new exhibition program, that the artist from New York proposed a four hands exhibition, a collaborative project with Barcelona’s Yago Hortal, who regularly exhibits with Senda.

The enthusiasm of these two artists for taking part in this collaboration has turned this exhibition into a unque event of special importance, something that goes further than the usualsolo painting show.

The exhibition ‘H-H. Halley meets Hortal’ has come together after eight months of conversations, e-mail exchanges, and the cross-posting of ideas, studies, and drafts in which both artists responded to each other’s practice.

This led to conversations about things they have in common — and others that differentiate them — inside the world of abstract painting. It highlights the New Yorker and the Catalan, experience and youth, rationalism and randomness, geometry and gesture, two approaches to the mastery of color… a back and forth dialogue about what unites them and what distances them.

At Senda, each artist will exhibit three large paintings, conceived of with the goal of establishing a conversation. In addition, Peter Halley and Yago Hortal have created five collaborative works on paper, signed by both artists.