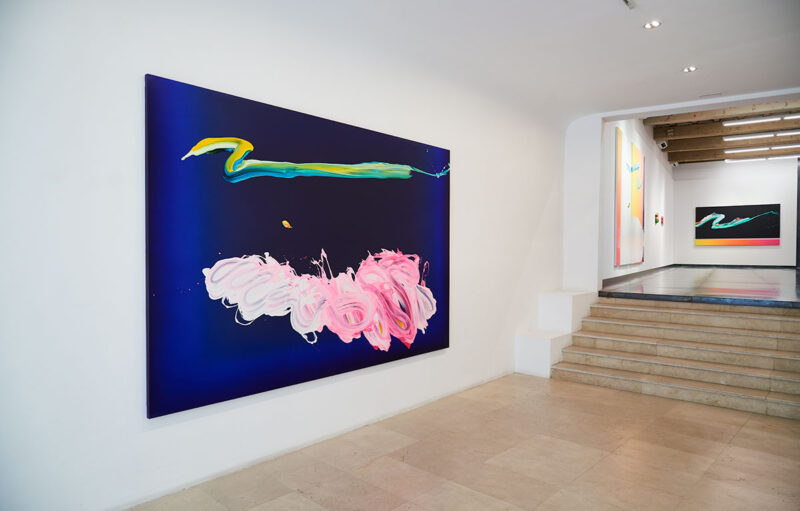 
Yago Hortal poses in Rigor y Rosa an exercise of synthesis and confrontation of the semantic of his language and stresses the foundations of his painting through an inversion of the assimilated concepts and a resignation of his comfort zone. In an introspective challenge and through a formal reduction of expressive mediums he bares his work into form and background thus reaffirming his practice.

Through a visual palette endowed with a great variety of tones and fluorescent colours, Yago Hortal inverts the duality of neutral background and relevance of the brushstroke to deepen in the specificities of his praxis and to give value to the whole painting. In the optical cognitive illusions, as the Rubin’s Vase investigated by the psychologist Edgar Rubin and developed by Gestalt theory, it is produced the multistable perception or tendency to jump back and forth between two or more interpretations, in this way Hortal plays with the alternation of the role of the background and figure. Thus, he emphasizes the entire pictorical surface and claims the contribution of the background as a positive space to perceive in an autonomous way and on equal terms with the brushstroke of the foreground.

This synthetics artworks stripped of all artifice and allow the viewer to appreciate with greater clarity the energetic brushstrokes generated by acceleration rhythms and pause that flow into the composition as a color explosion. Furthermore, these brushstrokes become more stylized and lead the way of the look providing a sense of movement to the representation. This process of deconstruction emphasizes the traceability of the creative process through the evidence of the used technique with the splashes and drips of paint cut out on the background. In this way, the forms expand all over the linen, process that culminates in the expansion of the painting beyond the limits of the canvas, endowing the artifacts with a marked sculptural character. In a new impulse, Yago Hortal often uses polyptychs of different measures and provisions that burst into the architectural space by adding the vacuum in which they are reflected and merged the colors as pictorial surface to apprehend.