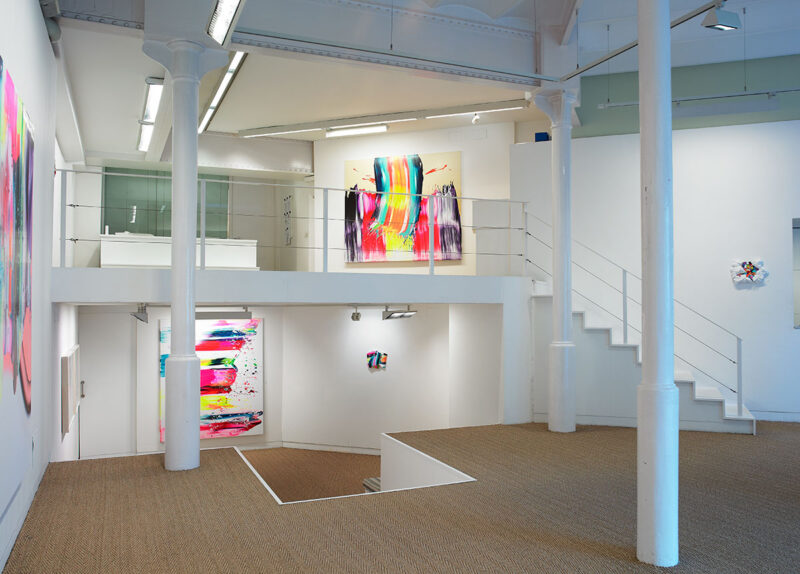 
The outstanding visual impact of the paintings by Yago Hortal (Barcelona, 1983) has attracted increasing interest in this young painter, living and working in Berlin. The artist has come back to Barcelona in order to prepare and present his current exhibition at galeria SENDA, after having exhibited in Los Angeles, New York, Wisconsin and Berlin. He is the only artist in the gallery under 30 years and holds a characteristic painting style, which is not influenced by the previous generations of Spanish painters, but is on par with international tendencies.

Hortal’s imaginative use of colour has not been unnoticed in the www, so that images of his work have been asked for by leading companies in their sectors, such as fashion, cosmetics, clock producers or consulting enterprises and has been commissioned to design and customize objects such as toys or snowboards, for example.

In this exhibition, Yago Hortal presents a series of paintings, in which the use of colour, evoked through energetic strokes, is the leading actor. The extensive application of it, coupled with the use of saturated tones, grants his work an enticing visual impact, in which multiple chromatic matrices are displayed with great harmony and audacity. The possible shapes and combinations expand through the canvas and even seem to storm out of it, invading the architectural space. Thus, the artist employs colour as a vehicle to symbolize vitality and impetus by using large quantities of pictorial mass, that confer each work an unique expressiveness with sculptural or bas-relief-character.

The creative process allows Yago Hortal the possibility to establish a relation between chaos and control. This relation shows itself through a directed fluency and a contained naturalness, which results as an unexpected alliance between the elements’ disorder and visual coherency of the whole.

The artist uses a great variety of random shapes, undulations and gushes of paint to lead the viewer’s eye through the entire canvas and even beyond, giving his creations a very dynamic feeling to it. The transmission of the strokes’ movement to the canvas lets the viewer guess the painting methodology chosen by the artist, adding a layer of intimacy to this dialogue. This conjugation of the spontaneous with the rational reveals an artist, who attempts to tame colour, resulting in spectacular outcomes.

Yago Hortal (Barcelona, 1983) graduated in Fine Arts from the University of Barcelona and currently lives and works in Berlin. His paintings have already been exhibited at numerous galleries and institutions across the world and position him as one of the leading upcoming artist in the contemporary art world.

A catalogue of his first institutional exhibition has been published recently under the title “Pintures 2006-2011”, which was held in Casal Solleric, Palma de Mallorca, Spain, from April until June 2012.