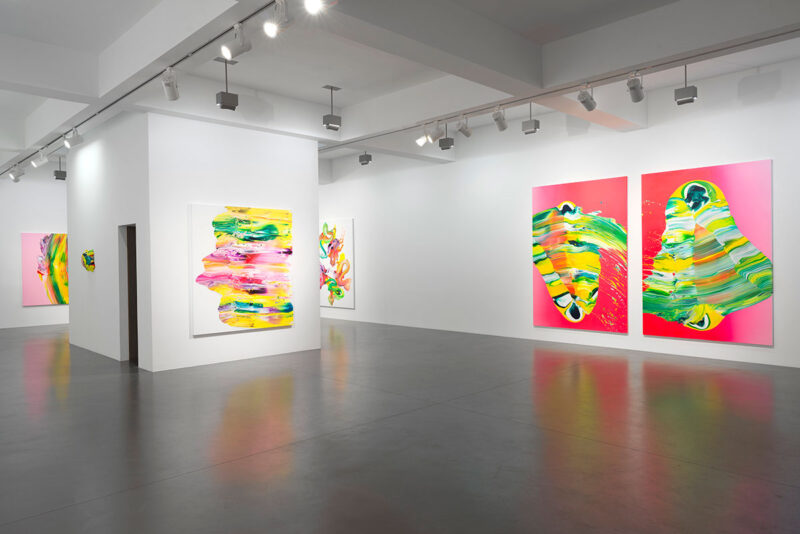 
This summer the gallery is treading new ground by presenting an exhibition by the young Spanish artist Yago Hortal (born in Barcelona in 1983). The artist hitherto fairly unknown in the German- speaking world is at the beginning of an international career in the art world. Promoting young talent has always been a major pillar of the gallery’s program, along with the presentation of works by established artists.

Earlier this year Peter Halley, the main American representative of Neo Geo, invited Yago Hortal to cooperate in an exhibition in Barcelona. The remarkable success of this venture shows that the young Spaniard is on an equal standing with the established artists of recent art history. When asked about his sources of inspiration, he likes to mention Bernard Frize’s sensitivity for harmonious colour combinations and Katharina Grosse’s expressive gesture. Nevertheless, Yago Hortal’s art is completely individual and highly unmistakeable.

Yago Hortal’s works are characterized by the skilful balancing of control and chance. The artist makes colours on the canvas flow into each other by means of a special painting tool, but how this works is a secret that is not allowed to leave the studio. He steers the colour, pulls it across the canvas, accelerates it and then by sudden withdrawal of the paintbrush, splashes it over the canvas. The exclusive use of Spanish acrylic paint, which in this intensity of colour and texture is available only in his homeland, contributes to the extraordinary appearance of his works. This sophisticated technique results in abstract compositions full of dynamism and vitality, poised with intoxicating sensuality.

Yago Hortal divides his œuvre into three groups of works that he describes as families: the first comprises pictures consisting of a single large brushstroke. Detailed, almost baroque, small-scaled brushstrokes populate the canvas in the second family. Tube-like forms serve as a background for the explosion of intoxicating colour that spreads out in the foreground. The third family consists of three-dimensional wall objects: Yago Hortal’s unmistakeable entanglements of colour emerge here as sculptures from the canvas. Acrylic paste, applied in several layers up to 15 cms thick onto the canvas, give the colour growths their three-dimensional appearance. This family is the most elaborate in its production: it can take up to two years to complete a work.

After studying painting at the University of Barcelona Yago Hortal spent a few years in Berlin, which he considers to be “the world’s most important city of art”. The sun of the south and the chance to work in a studio in the centre of Barcelona took him back to his home city. There in San Pedro (in Catalonian Sant Pere), the most picturesque quarter of the city, in recent months he created the works now on show in our exhibition. The name of this place, abbreviated to SP, is in the title of all the artist’s works, linked with a continuous numbering. This is Yago Hortal’s homage to his Barcelona.